During November 2018 it came to the attention of the Johannesburg High Court that 4 Krugersdorp learners had been held in a BOSASA juvenile detention centre for 77 days as a result of them testing positive for Dagga while at school. Their detention followed a minor infraction of the conditions of a diversion order – the “sentence” which is usually given to minors by the Magistrate’s Court, which is non-custodial.

The Centre for Child Law , known for their work protecting children from the harsh effects of the justice system, intervened as amicus curae in the Johannesburg High Court and requested that the court decriminalise Cannabis for children. Along the way, this highly respected NGO even had to refute charges that they “condoned children smoking weed” as part of the usual media hysteria.   The Sunday Times reported on the story  and eNCA featured it on the news as well as airing a more in depth segment on their Checkpoint programme.

All the details are there for South Africans to read and watch. It is a grisly tale of Human Rights abuse and, to make matters worse, the abuse has been perpetrated, not only by thugs in the detention centre, but by the police and the courts, the very institutions that are meant to protect the young and vulnerable.

If you follow the comment thread of the story on Twitter, there are plenty people speaking out AGAINST the decriminalisation of Cannabis for children. What? So it is for the children’s own good that they are punished by criminal courts? The comments show a woeful lack of understanding of the issue and the same can be said for all of our detractors who use “What about the children?” as an excuse to keep Cannabis illegal, keep locking us up in cages and keep burying our heads in the sand. 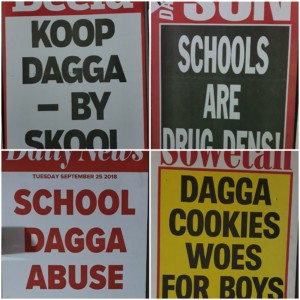 No, Cannabis should not be available for sale to those under 18, unless that minor needs the plant for a medical condition. Yes, there must be strict regulations to prevent the sale of Cannabis to minors (as opposed to the “no regulations and easy access” we have now) and, yes, there is NO place for Cannabis in schools. BUT. To lock children up in cages for the naughtiness that is Dagga Muffins at School? Most people we know have a “Dagga Muffins at School” story and South Africa would do well to take a look at the hysteria surrounding this plant and children. A good, hard look at the evidence will show everyone that there is no need for hysteria, just careful consideration of children in the process of legalisation.

Please watch the eNCA feature and speak out against all the naysayers and ignorant folk when they start getting hysterical about Dagga and children.

Please support Fields of Green for ALL’s efforts to achieve EVIDENCE – BASED Cannabis Regulations in South Africa, not criminal penalties that disproportionately harm the young, the sick and the poor.

Cannabis mentioned at the SONA 2020