There was a disconcerting headline in one of South Africa’s major Sunday newspapers recently. An ex South African Revenue Service (SARS) employee made the headlines for all the wrong reasons. In an attempt to character assassinate a key witness in a government corruption scandal, Advocate Rasta Keletso Manyike was branded an  “unemployed, dope-smoking Rastafarian” to discredit him as a witness. The author, seasoned reporter Jacques Pauw, when asked by Radio 702 presenter, Eusebius McKaiser as to why it was necessary to discredit an unemployed cannabis using Rasta as a witness , he apologised and remarked he should have told the Sunday Times to drop the headline. Pauw in his article described the witness as a Rastafarian, but it was the newspaper that added the ‘dope smoking’ before publication. He 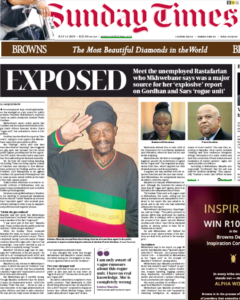 regrets not telling the newspaper to drop the ‘dope smoking’.   The Rastafari community is understandably angry at the portrayal of one of their members who is unemployed and a cannabis user as being somehow compromised and without integrity as a person.  The Rastafari United Front will be picketing the offices of the newspaper in question, Tiso Blackstar on Thursday 1st August 2019to demand an apology from the media giant.
President of the Rastafari United Front, Ras Thau-Thau Haramanuba, speaking to the SABC, remarked that the RUF found the headline distasteful and are “unhappy with the manner in which Manyike is being portrayed”.
The protest will gather in Johannesburg at Berea Park from 9am 1st August and march to Tiso Blackstar Group on Empire Road.

Two Cancers in One Day