Events as told by the victims:

I am just writing this email to you to explain the whole situation of 16 April 2020. I think it would be better so I don’t leave out anything. And while the memory is still fresh.

To start of we were on our way to get medicine for my child because the pharmacy in Houtbay is very limited on their stock. On the way we got stopped by the police. I got asked if I have a permit I replied no, I also did not have my wallet on me, I forgot my driver’s license in my wallet only had my bank card on me in a little folder. Fair enough they wrote me the fines for that. They did not ask us if they could search the car, they just told my brother to get in the back, and then immediately started searching the car. They found the Marijuana under the car seat, concealed in plastic bags, and a paper bag. They found the smoking papers and they found a scissors in my car, the scissors I use for work I am a chef and have a lot of little tools I use. Fair enough we were on the wrong about the marijuana. My brother admitted it is his and he smokes marijuana and it’s for his personal use. The woman police officer keeps on repeating he is a dealer and he keeps on telling her its for his personal use. And then they were still busy searching the car and trying to figure out if they should arrest him or not.

I made a mistake by telling them half is mine and half is my brothers, I was under some pressure, and though maybe the charge for my brother wont be so bad, if its divided for personal use, I was honestly just trying to get them not to arrest my brother.

The woman police officer told my brother “what applies to Africans apply to us”, I think that’s a very racial comment, why bring race into this, we did not say anything about race, and she kept on babbling about this African stuff, we have it on video. She really got upset about the video. And told us we do not have permission to make a video. She started packing out all my belonging in the car on my roof, keeping the marijuana, scissors and rolling papers on my roof, and just took the rest and chuck it in my car, then she took photos of the marijuana, scissors, and rolling papers, displaying it on my roof of my car. And then took it and displayed it on my dashboard to take more photos, it was like a massive drug bust or something for her. During this whole situation as a whole she was walking around with the marijuana, instead of maybe putting it away while they are processing us. Because there was civilians walking past and they stopped a car in front of us with 5 people in it, they were also standing with us while this police woman is advertising her bust. The driver in the car in front was standing on the side walk with me and he told me they were on their way to PE for a funeral, and he also did not have a permit, and he was explaining to me what they were saying in Xhosa, because they refuse to tell us what’s happening, they are just continuing in their own language. They gave them a warning and let them go, 5 people in 1 car, on their way to PE during covid 19.

They further on proceeded finding a arrest vehicle for my brother. Eventually the Arresting Vehicle arrived, they started loading my brother in the van at the back, which he gave his full corporation. They informed me I am not arrested, they are just going to impound my car and I have to get hold of a friend to come and pick up my car at the police station, to take me home, because I don’t have my drivers license on me.(fair enough)

But then they told me to get in the back seat of my car, which has a baby seat in as well, I drive a Datsun Go (so it gives you picture of how small the car is).Two police officers get in the front seats of my car and another squeeze’s in next to me and the baby seat on my side( what a way to stop covid 19, its almost like they want to give you covid 19). While I counted more than 5 police cars that remained while we are off to the police station. They used my car as a police taxi basically.

So eventually we arrive at the police station, and things just started to exoculate. I was there essentially to get my car, and also trying to get my brother out of jail, So I phoned the lawyer and my friend to come and pick up my car and myself. And all of the sudden they decided to arrest me also, for the same charges. When I told them its not rite, so if I did not come along I would not have been arrested, how does this work. They responded its their right to make arresting decisions within 48 hours. So I got arrested.

There was in total 8 police officers writing a statement and docket, and some police officers helping them. They all sat closely and cozy next to each other around a picnic style table, leaning over each other and such. The lawyer just arrived and also witnessed this, social distancing does not exist in Cape Town Central police station. It took 8 police officers to arrest 2 people for possession of Marijuana a total of 4 hours to do all this, I don’t know the hours the police work, but that’s half a shift if you work 8 hours a day. Every time we have to see something or fill in some details we get called to this table, with this whole group sitting there.(covid 19!!!!!!!). 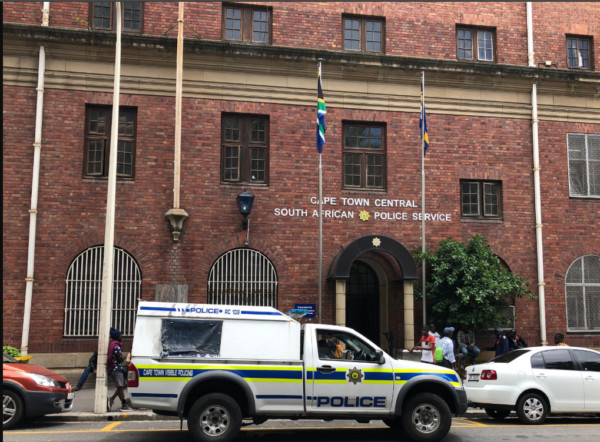 They Weighed the Marijuana at the police station and refused to weigh it in front of us when my brother asked them if they could weigh it in front of us, they denied his request. After they weight it they stated it was 28kg, my brother had to correct them and tell them that’s impossible for that amount to weigh 28kg.And they corrected it eventually , so we don’t even know the real amount, my brother was under the impression it was about 20g.(4 x 5 g pkt). We still honestly don’t know the amount.

My brother told them not to sit so close to each other because of the epidemic, and the respond was “You don’t tell me what to do”. Covid 19 is their last concern.

And then one of the other police officers who was situated in the police station asked them if they read our right to us already, and she replied not yet still have to do this. So we got arrested without them reading our rights. They forgot to read our rights to us, if the other police officer did not remind them of this it would never have been done. We also got told before the whole rights reading thing that we don’t have rights. Multiple times.

Eventually the paper work finishes, and another police officer came in to test the temp of all the police officers, but they don’t take our temp (that was really strange, and a very clear message). And we got sent to the holding cell.

And after a couple of minutes they moved us to another holding cell. Exposing us to 2 different cells, which doubles the risk of getting exposed. Another very sad thing we witnessed while walking to the other cell and while being in the cell is that they put groups of people in holding cells while there is cells that are not in use they are empty. The cells have probably never ever been sanitized ever, and allot of people has been in and out of them from lots of different locations. We even got told by a police officer in front of our lawyer that he has smelled allot of dead bodies in his life, and in the morning that smell of the cells tops the smell of those dead bodies. It honestly smells like human waste and piss in there. I really think someone has to stand up to this, it’s really inhumane. They are really going to kill allot of people or already have. They are assisting covid 19 not trying to stop it.

They did provide us with a mask before entering, toilet paper, blanket and bread. Covid 19 . And we got told we must get ready because there would be people joining our cell. And Cape Town Holding cells are really not a place where we want to be (they were probably trying to scare us or something, I don’t know their intensions). Luckily our Lawyer got us out just in time, thank the Lord for this. At the end of all this they told us only 1 cigarette of Marijuana is legal for personal use.