When we listened to Judge Zondo’s now famous Constitutional Court judgement in September 2018, we knew there were a lot of grey areas and unanswered questions. We also knew that for any part of the judgement to be fully understood and any ambiguity to be ironed out, it would have to be in a High Court. As we enter the second year of de facto cannabis decriminalisation in South Africa, some glaring social problems have become apparent. One such problem is drug testing, whether in the workplace or worse, in school. Now, it wouldn’t take long for you to find out our opinion on drug testing online somewhere. To us, it is one of the most insidious practices of prohibition, is completely unconstitutional, a breach of a person’s bodily sovereignty, and someone somewhere is coining it at the expense of others. Some people actually believe the threat of drug testing is a deterrent, but we’d beg to differ.

Random drug tests have the ability to do far more harm to a young person’s prospects than any occasional weed use could and should be banned. There should be a reasonable suspicion, and the school must have a good indication that there is a valid reason for testing. After all, a persons future is fundamentally on the line at this point. Failing a school drug test normally ends badly for the student. 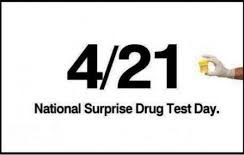 It wasn’t that long ago that three workers were dismissed from a Durban transport company for testing positive for dagga. Not tested for impairment, intoxication or inability to work – just for having anything up to one month old THC in their systems. The worrying part of the debacle was the CCMA upholding the judgement, which surprised many experts. Workplace drug testing policy simply hasn’t caught up with the ConCourt judgement.

The same goes for schools. Most South African schools have some sort of ‘drug policy’ in place. The drugs screened are all illegal substances, (which still includes cannabis in all the policies we’ve seen to date). But here’s the thing – an eighteen year old matric student now has a constitutional right to use dagga in private, but then what? By testing an 18 year old student positive for dagga, what exactly is that proving? It certainly doesn’t prove intoxication or an inability to study.

A case of random testing in a well known Johannesburg private school came to our attention recently. A matric student who uses weed for exam time anxiety with his parent’s blessing, tested positive for dagga and immediately given two demerit points. There was also the threat of expulsion if he didn’t test ‘clean’ in six weeks time. In six weeks, he would be in the thick of matric exam stress and anxiety and without his simple cannabis protocol to lean on, things were looking bad.

However, the parental blessing and understanding was the important component in this story. This young man has accepting parents who understand the role of occasional cannabis use for anxiety and stress, and they were livid at the school. They were justifiably concerned about their son’s ability to cope with cramming for the exams of a lifetime.  His proven effective medication has been severely compromised. For what?

They took some advice from Schindlers Attorneys, SA’s go to cannabis law firm, and our legal team for the past number of years all the way to the Constitutional Court. Their dedicated cannabis department fired off a typically hard hitting but beautifully eloquent letter to the school principal, reminding her of the (adult) boy’s rights and that a Constitutional Judgement trumps any school drug policy pertaining to dagga in a court of law, and maybe they should reassess their position.

To their credit, the school holding company did. Schindlers’ clients received a reply , all merits were reinstated, and the threat of a subsequent drug test was dropped. Another small victory for cannabis acceptance and a vital precedent set (that we know of) in a very emotive field.
The pen is always mightier than the sword.

If you are experiencing the same situation, as we know many parents are – it is crucial that the parents stick up for their offspring. Drug testing is such a disastrous breach of trust in the first instance, any further punishment is completely unnecessary and has long term repercussions. Druggie, daggakop, dope head – the stigma is real and can bite hard as a teenager even after all the threats of expulsion and de-merits have gone away.

Random drug testing is expensive, ineffective and a yes/no simplicity to an always complex situation. The money allocated to school drug testing budgets could be used in so many other ways. Adolescents are easily influenced, they push their boundaries and can obviously make mistakes. Why violate their rights and punish them through drug tests? We can’t ever see that fixing any drug problem.

PS……thank the gods for progressive parents and of course to Schindlers Attorneys – always there in the background, available at any time, to assist in changing societal perceptions of the humble dagga bush.