The more we attend national meetings, workshops and conferences, the more the word ‘hemp’ is being mentioned. With the discovery, or more like the realisation that CBD is present in ‘hemp’, the dynamic of this non intoxicating version of ntsangu is changing rapidly.  But the issue of modern day ‘hemp’ as a concept is rooted in a complete thumb suck. International hemp v cannabis legislation is an astonishing case of arbitrary taxonomy. The International Association of Taxonomy actually use the very word to describe an ‘arbitrary’ quantification of 0.3% THC as the line in the sand when describing ‘hemp’ v ‘cannabis.

In 1976 a government research grow in Ottawa, Canada and a Dr Carlton Turner, at the time the man in charge of the only US cannabis research project at the University of Mississippi, agreed with this unicorn poo 0.3% figure and the rest, as they say, is history.

Zero science. Just a rough, justice system initiated guide to describe intoxicating or non intoxicating cannabis, and therefore whether you are breaking their law or not.

Turner ended up being Ronald Reagan’s Drug Tsar and in the early 1980’s proclaimed, ‘Marijuana is not, and will never be medicine‘. That statement didn’t age well.

Most of the people we come across with a desire to get into the cannabis sector want to grow ‘hemp’ purely because it’s what we’ve all been given as an international concession. A tit-bit of ‘legalisation’, but only 0.3% of the story. Australia, Switzerland and Columbia legislate 1% and the rest of the EU used to be 5% but are now at 3%. Decisions based on nothing much, nothing the police can see and differentiate between anyway. Because of this identical outward appearance between 0.3% and 0.4%, hemp is still banned as a concept in South Africa. After upwards of thirty years of trials, there isn’t even any data to go on. That’s profoundly sad, and another blog post subject altogether.

The reason for our arbitrary hemp interest at this moment in time is we keep hearing rumours on the conference circuit of the introduction of Chinese hemp cultivars into the Eastern Cape. Again, with the only motivation being their acceptance within the law. It makes no difference that they are unlikely to be anywhere near suitable for Southern African conditions, especially in those unique coastal valleys, except maybe for their drought resistance in some instances perhaps.

All cannabis species are excellent producers of pollen. It won’t be long before the low THC land races mess with those precious 0.3% hemp levels and cross pollinate it above that non scientific threshold. At the same token, all that Chinese ‘hemp’ will adulterate the Pondoland cultivars and from what we’ve seen and researched, there is more CBD in this former Bantustan’s valleys than in any imported cultivar you could hope to grow there. Has anyone researched the possibility of our own perfectly harvest worthy Pondo CBD being diluted by international genetics cross pollination in the area?

Because that’s the other thing….There isn’t a heck of a lot else being grown deep in the valleys. Corn struggles, beans struggle – but the endemic cultivars of Cannabis Sativa thrive. That is what brought the humans there in the first place. Far from prohibition’s eyes, and hopefully the range of the police helicopters.

In the USA, Californian ‘hemp’ farmers are grappling with the latest round of amendments, regulations and hoops to jump through since the national Hemp Bill was passed. Since 2018 there’s now a term for ‘hemp’ that has crept, for whatever reason, above 0.3% THC. ‘Hot hemp’ is real, and Californian farmers want to know where they stand with it, knowing that 10 million plants have just been destroyed in their hood. Cross pollination is real. Prolific in the case of cannabis, and must be addressed in the context of our former Bantustan growing areas. Not addressing it is just another way to continue criminalising the farmers. It would be irrational to think the low THC plants in the area could be eradicated.
Thirty years of trying has proved they cant, so lets work with what we’ve got surely?

Why are we complicating this for ourselves because of irrational, irrelevant international drug conventions? The average THC component in Pondoland is maybe 4% for illustrative purposes (we stand corrected), but that 4% is 3.7% more than permitted. That 3.7% THC is automatically converted legislatively into an ‘undesirable, dependence producing drug with no medical applications’.

Does anyone else find that strange? The sheer enormity of the implications of having this arbitrary figure to deal with is staggering.
There are ways of growing a plant to minimise the THC content at harvest. Maturation time, spacing, time of planting, or even distillate extraction at harvest to name some. It seems to us to be a real shame this 0.3% proclamation should endanger the purity of  South Africa’s Eastern seaboard legacy genetics. Why run the huge risk of trying to fix something that isn’t even broken.

You’ll never find plants more suited to providing sheer biomass for building, electricity generation, plastics and fodder to name a few. While everyone is starry eyed imagining the foreign exchange on all the licensed exports of hemp CBD, just take a step back a minute. The Eastern Cape owes in part, it’s very societal structure to Dagga. The plant is endemic for centuries and more recently of course, 100 years of prohibition.

In our view, the people of the Eastern Cape and other traditional intsangu growing areas, need to experience the benefits of the cannabis industry long before there is the rarefied air of medical grade ‘licenses’ and years of international cultivar ‘research’ for export. Tons of legacy cannabis biomass can be grown right now and need never have to leave the province and will grow 4m high, twice a year, no research required. Not only will it employ, Pondoland would and should completely empower the area with countless support industries to service this agricultural sector.
Everything is already in place – it has been for generations. Just bring the underground into the light and let the homesteads self regulate themselves as they have been for hundreds of years.

Columbia is a parallel story to South Africa’s – grappling with the same issues but at a more advanced stage. Pretty much all cultivar research is done with the aim of exporting the CBD isolate holy grail. Indigenous cultivars again have too much THC content to appease the UN conventions, despite Columbia’s exceedingly generous 1% threshold between socks and psychosis. We see headlines with words like tribal, indigenous, Andes and sustainability in the mix as North American corporations introduce their ‘hemp’ obsession across rural Columbia for export. 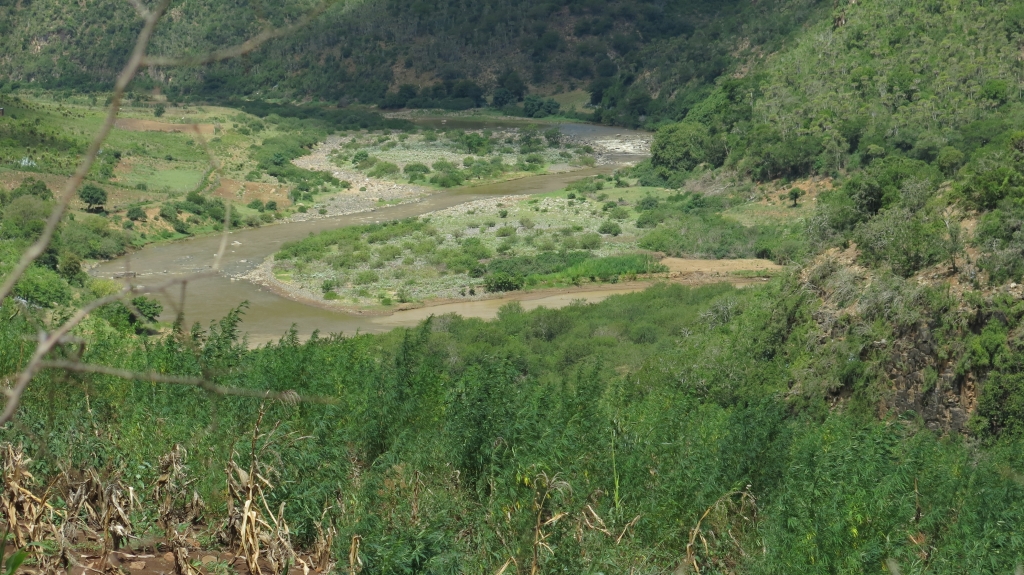 This hemp ‘line in the sand’ legislation has been driven by countries with no traditional growing of intoxicating cannabis plants. The USA and Europe didn’t have this cross pollination of historical land race entourage plants to deal with, but South Africa and the rest of Southern Africa has. We believe the whole ‘hemp’ in Southern Africa argument should be completely revisited to accommodate SA’s Pondoland (and other) legacy land race genetics and focus on our featured image of a communal plot of dagga in the mountains, enclosed with an indigenous fence to protect from livestock. It’s been there for ever and nobody can say they planted it. It isn’t somebody’s, it is everybody’s.
The kraal is self seeding and perpetual, year after year. Nobody is in the slightest bit interested in the minimal (but no doubt excessive) THC content. At 4%, why should they.

How Does Smoking Cannabis Give You “The Munchies”?

CBD May Convert to THC in the Stomach

How Fab is this competition from GT Hydro