In June this year, Chinese deputy director of narcotics control Liu Yuejin publicly denounced cannabis  legalisation as a “new threat to China,” claiming domestic usage had grown by over 25 percent in 2018. The Chinese government has always promoted a narrative that the world outside China is very bad and the Chinese people are lucky they have a government that protects them from it. As dagga legalisation progresses through the ‘western world’, Chinese State rhetoric has been ramped up. In part, the problem is considered a foreign student one. More and more Chinese are studying abroad and when they return to the motherland full of western culture, they invariable bring home a positive story about weed and ‘spread cannabis culture like a contagious virus‘.

Punishments for possession are harsh. The death penalty exists for over 50g of a controlled substance and is regularly enforced. It seems to have more to do with keeping foreign habits at bay and the communist dream intact than the scourge of Dagga abuse, because it only seems to be foreign nationals who are targeted.

So it came as a unnerving surprise to see a Pondoland King in a photograph surrounded by a group of Chinese in an East London based Dispatch Live article. This particular King, the King, King Ndamase Ndamase is reported to be in advanced talks with Chinese investors representing SA Honglin Investments Pty Ltd, eager to get into the cannabis business. Honglin Investments was in the news earlier this year when a Daily Maverick article reported the company was involved in a contract to commence exploratory mining in the Nyandeni Kingdom, including a pristine section of former Transkei coastline to the south of  Port St. Johns. Homesteaders have reportedly already been told to vacate their land. It must be cool being a King – the sole signatory of such an earth shattering deal. A deal that will affect generations to come. 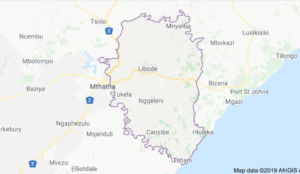 We can only imagine what kind of Dagga deal the King is cooking up with his Chinese chommies. Another recent headline from the same publication claims the industrialisation of dagga in the valleys of the Pondoland could well create over 300,000 jobs. That’s as maybe, but at what cost working for a Chinese master? You only need to look to Zambia and the conditions black Africans are forced to work in down a Chinese owned copper mine. The longstanding Zambia/China detente is fracturing as a result of this, and protests are ongoing in the country’s northern mining areas. Why should it be any different in Pondloand. Living wage? doubtful, if the Chinese are in command.

We only hope that the strides made by the Eastern Cape Premier, Oscar Mabuyane to strive for an inclusive future cannabis industry in this ancient growing area bear fruit. It is almost as if all we have to do is take the SAPS out of the equation and everything will be OK. We don’t suppose the King, the Chinese or the Premier for that matter have thought through what to do about the continued arrests and criminalisation of South Africa’s Dagga using citizenry – while the likes of  Kings and Chinese colonists line their pockets.
Aluta continua.

How to Regulate Traditional Cannabis in South Africa